There are certain jobs we should all be grateful other people do so that we don't have to. Defusing bombs immediately comes to mind. And after visiting Mille-feuille, a bakery on LaGuardia Place, I'd throw croissant making into that category. 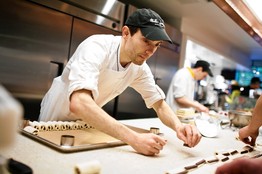 There's no way I can write about the subject of these continental confections without sounding like a snob, so let me avoid any misunderstanding by stating at the outset that I am a snob. I first became acquainted with croissants on a trip to Paris when I was about 8. There are certain foods that require a sophisticated, or at least adult, palate—caviar, I suppose—but there are others that make resounding sense to a kid.

After having spent the better part of my childhood to that point eating lumpy oatmeal for breakfast, and perhaps Kellogg's Frosted Flakes come the warm-weather months, the discovery that breakfast was a meal that one could look forward to, that it could include pastry masquerading as food, was nothing short of a revelation. Add butter, especially French butter (I'll soon get to the subject of whether spreading butter on croissant is advisable), and great jam and any reservations or distrust you have of the French magically melts away. Croissants alone are proof that France is a great nation. Had they contributed nothing to civilization but croissants, that would be sufficient. 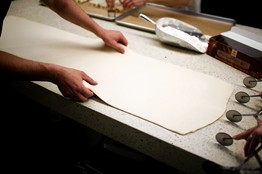 The problem is that getting a croissant in New York that makes the brain light up like a Christmas tree is a crapshoot. I can only speak to those in my immediate neighborhood, which is fine, because a croissant isn't something you should be expected to track down by hailing a cab or boarding the subway, bleary eyed, at 7 a.m. They must be within easy walking distance. Those at Eli's on Third Avenue are hit and miss. When they're good, they're almost equal to Parisian croissant; when they're not, they fall to Earth with a thud. Pain Quotidian also makes a decent croissant, but it's somehow subtly different than a French croissant, maybe because the company was founded in Belgium.

So it's with substantial anguish that I report that perhaps the best croissants in New York—those at Mille-feuille—are so inconveniently located, relative to my coordinates, that they may as well be in Paris. I'm not fool enough to consider giving up my rent-stabilized apartment to move closer to the bakery, but I'd be lying if I said the thought hasn't crossed my mind. 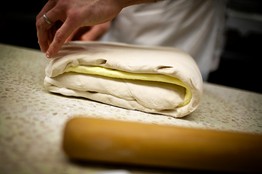 The dough inlaid with butter

Speaking of his competition's croissant, Olivier Dessyn, Mille-feuille's owner, who arrived here from the City of Light only a year ago, after training as a pastry chef at the Hotel Meurice, said: "It's like bread for me. I could give you names. It doesn't have that much taste."

He went to one high-end bakery in SoHo that shall remain nameless, and after biting into its pain au chocolat, asked for one made the same day. The server told him it was. That pretty much sums up my experience with similar flaky pastry treats in this otherwise great metropolis.

I learned of Mille-feuille from Mireille Guiliano, the author of the best seller "French Women Don't Get Fat." I was telling her that after learning how to make a foolproof omelet—which she was attempting to teach me—I felt that my next priority was acquiring the skill to craft a Parisian-caliber croissant.

It was Ms. Guiliano who directed me to Mr. Dessyn. Indeed, my recollection is that I went directly from her apartment to his bakery. Since it was already late afternoon, I couldn't persuade myself to try a croissant; indeed, they may have been sold out. But I purchased a pain au chocolat, a potentially even more fraught culinary experience.

Utterly apart from questions of freshness, texture and taste, there's the chocolate-distribution factor. I don't understand the point of calling something pain au chocolat when it's mostly pain and very little chocolate. (Oughtn't it be the other way around?) So I'm pleased to report that not only was Mille-feuille's the best I've ever had, but it also didn't scrimp on the chocolate. 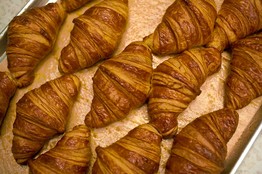 In any case, Mr. Dessyn wasn't in, so I returned last week for a lesson with the master. To make a long story short, I quickly realized—especially after the baker listed all the obstacles standing between you and croissant nirvana in your home kitchen, the meteorological conditions not least among them (humidity wreaks havoc on their delicate constitutions)—that my time could more profitably be spent eating his croissant rather than trying to make my own.

But first about the butter. I was under the impression that an American croissant can never be as good as the French version because our butter is different. Mr. Dessyn said that's not true, at least if you know where to buy your butter. His comes from Vermont Creamery, and boasts 86% butterfat.

Now to the question of whether a croissant should be buttered, concerns about having easy access to a defibrillator aside. My general thinking on the subject is that if butter is good, more butter is better. And that the butter used to make the croissant doesn't really count because you can't see it.

However, after watching Mr. Dessyn manufacture his croissants—which essentially consists of alternating layers of dough and butter ("That's what makes it flaky," he explained.)—I can state with confidence that buttering your croissant is unnecessary. "It's like putting butter on Nutella," he stated.

Where experience becomes essential, and where great ingredients aren't enough, is in getting the butter and dough to bond and become greater than the sum of their parts. That is what lends croissants their elusive, ecstatic quality. "If the butter is hard the dough has to be hard," he explained. "Soft—soft. That can be the trickiest part. You need to be skilled and courageous."

Needless to say, I'm lacking such courage. My hunch is that, all in all, easier than making my own croissant from scratch would be to capitulate, hire a car service, travel downtown and have them wait while I collect my order. But for those made of the right stuff, Mr. Dessyn and his able team by popular demand are inaugurating Friday afternoon croissant-making classes on May 18.

Mr. Dessyn contends that whatever the obstacles, if you approach his session with passion and seriousness you'll be able to make radiant croissants at home. At a minimum, you'll depart the bakery with between 15 and 20 croissants and pain au chocolat.

And I can attest from personal experience that, contrary to the laws of God and man, they still taste great the following day.

Mille-feuille is a bakery in Manhattan. A photo caption in some versions of this article misspelled the baker's name as Meille-feuille.

Come on in, on vous attend!

Signup to get the latest news...